Consider what the world of media would look like without The Intercept. Who would hold party elites accountable to the values they proclaim to have? The kind of reporting we do is essential to democracy, but it is not easy, cheap, or profitable. The Intercept is an independent nonprofit news outlet. For consistency, a piece of electrical tape was placed on the back of the phone approximately 5 cm from the top of the phone to mark where the phone should be positioned for GPS-only collection and another mark approximately 3 cm from the bottom of the phone for WiFi sampling.

At each point, two GPS points were collected. After the collection of the first point, the WiFi was enabled and two minutes were allowed to pass before the second data point was collected. A total of trips were completed around the test course. During the leaf-on period, total horizontal positions were collected.

Across both leaf-on and leaf-off data collection periods, this situation most often occurred at Point 6, where 11 visits during leaf-off and 18 visits during leaf-on the WiFi status icon on the phone screen was not activated. After the completion of each trip, the horizontal positions collected were exported from the phone as a. One aim of this research endeavor was to determine whether using WiFi affected the horizontal position accuracy of the GPS data.

Additionally, we were interested in whether an increased number of potential WiFi-users on campus had any impact on the horizontal position accuracy during data collection. Finally, we wanted to quantify the amount of horizontal position error a user could expect when collecting GPS points in an urban environment using an iPhone 6.

For this, Euclidean distances were determined between the monument position and the location of each horizontal position recorded. Statistical tests were employed to determine whether positional error from GPS-only and WiFi-enabled data were significantly different. Using nineteen collection categories Table 1 , the following hypotheses were tested:.

The sets of static horizontal position errors of the nineteen different data collection scenarios were tested for normality using a Shapiro-Wilk test. We found that the sets of data were generally not normally distributed. Therefore, a non-parametric test for statistical significance was required for statistical analysis [ 34 ]. Further, to describe the positional error, descriptive statistics including minimum and maximum error, and the RMSE of the horizontal position error were calculated for data collected at each sample point and under each of the eight data collection periods.

RMSE illustrates the error between the known location the survey monument and the collected location waypoint. Specifically, RMSE is the square root of the average set of squared distances between a known location and the location recorded during data collection. Finally, local weather data variables were compiled for the period of time during which the sampling cycle was completed.


Meteorological data was recorded for the time period of each trip using reports from nearby Athens Ben Epps Airport. Pearson's correlation coefficient was used to determine whether these weather characteristics were correlated with the horizontal position accuracy of the data collected.

Each weather condition served as an independent variable in the regression analysis with a total of 5 independent variables. In examining all horizontal position error derived during the GPS-only data collection effort, the minimum positional error was 0. On average, time of year did not seem to influence the average error observed in horizontal positions when GPS-only capability was assumed. In terms of overall performance, some improvement was observed in RMSE during the leaf-off period, but not in every case e.

Points 3 and 5 seemed to have the highest RMSE during the leaf-on period, and were joined by Point 1 during the leaf-off period Table 2. It should be noted that relatively large confidence intervals were also derived from the sample data, indicating significant variability in the observed positional errors. The RMSE was generally lowest at Points 2 and 6, which were in relatively open areas, thus there is an assumed reduction in multipath error.

On average, time of year also did not seem to influence the average error observed in horizontal positions when WiFi capability was enabled. And as with the GPS-only data, relatively large confidence intervals were derived from the sample data at these points, indicating significant variability in the observed positional errors. Further, the RMSE was again generally lowest at Points 2 and 6, which were in relatively open areas, thus there is an assumed reduction in multipath error.

However, we could not reject the null hypothesis when only considering the data collected from a single sample point. The error was also statistically significantly different when considering all sets of observations of horizontal position error observed during AM, Leaf-off, and high data collection periods High AM and High PM separately data collection periods. Sample Point 1 was the only point where there were many instances of detection of significant differences among the GPS-only and WiFi-enabled data. While we cannot be completely certain what is causing the significant differences at this sample point, Point 1 is unique in that it is surrounded on each side by multistory buildings which may be increasing the positional error when GPS-only data was collected.

However, each of these buildings house WiFi access points which may lead to a stronger WiFi signal at this point reducing the positional error when the WiFi is enabled. In examining the frequency of the error across all points, interesting patterns emerge Fig 3. For instance, during GPS-only data collection, both Points 2 and 6 had no instances of error sampling.

Similar to Point 1, the occurrence of error was mostly clustered in between 2 m and 20 m during GPS-only data collection. The error distributions at Point 4 and Point 5 were very similar between WiFi and GPS-only sampling with the majority of error falling between 2 to 10 m at Point 4 and ranging from 2 m to more than 20 m at Point 5.

This correlation was more pronounced during WiFi-enabled data collection but still only moderately. Minor positive correlations were found between tree cover and low vegetation and error during both GPS-only and WiFi-enabled data collection. Additionally, a minor negative correlation was found between the percent land cover classified as sidewalks, roads, and parking lots and positional error. While understanding the amount of horizontal error between a survey monument and a position collected by the iPhone 6 is useful, knowing the predominant direction of that error may also be important. 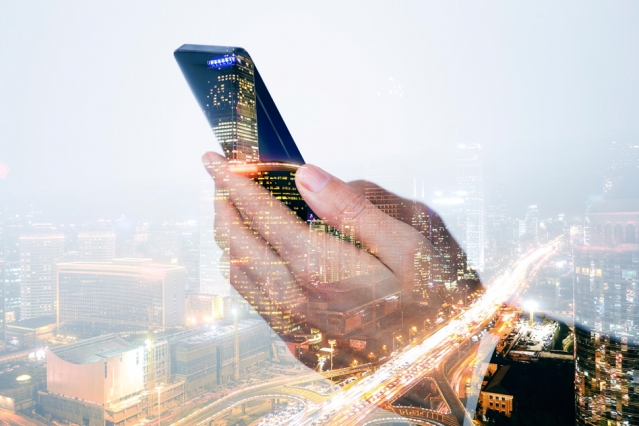